AMOS Conference organizers collaborated with AGI to produce a special AMOS Spotlight Session on commercial space flight safety. Titled, A Decade of Safety of Flight Services: AGI’s Contribution to Space Traffic Management, the seminar was live-streamed on 3 September 2020, in preparation for the regular Conference.

Stallmer noted, “July 2020 marked the 10th year of operational flight safety services implemented and operated by AGI. The Space Data Association was formed by satellite operators to enhance safety of flight through operational data-sharing and the promotion of best practices. For the past decade Association members have used STM and SSA services to safeguard the integrity of the space environment by relying on the Space Data Center.”

The conversation concluded with remarks from Kevin O’Connell, Director of the Office of Space Commerce, U.S. Department of Commerce, on the future of flight safety in space.

O’Connell emphasized, “The D.C. government office is closely watching the STM issue. My team and I at Commerce have been attacking the issues with a level of transparency and motivation that has not been present in a long time.”

“We appreciate all the hard work that AGI has contributed, not only to Commerce, but to the nation,” O’Connell added. “We are learning about the capabilities available today to help mitigate the STM and space-debris problem. Growing problems are the number of new launches as well as the number of satellites already in space. The international expectation of satellites launching in the next decade is tremendous. On one hand, we want to encourage that because in those launches new kinds of services will be available that are useful here on Earth, as well as for sustainable activities on the Moon and elsewhere. We want to make sure that it is all safe and sustainable, and we need to be sensible how we approach it.”

O’Connell concluded, “We are thankful for all the efforts of the National Academy of Public Administration. They confirmed that forming the Office of Space Commerce is the right way to approach the issues with an operational model to provide Space Domain Awareness and SSA. Again, thank you AGI for your decade of safety-of-flight service.” 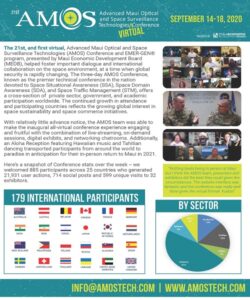